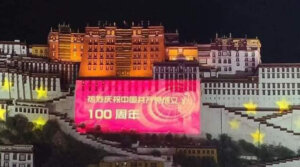 DHARAMSALA, 30 June: As China gears up to celebrate the 100th anniversary of the founding of the Communist Party of China (CPC), a Tibetan woman is heard crying in agony in two videos circulating widely on social media by the heightened restrictions Tibetans are subjected to and the overwhelming presence of Chinese in Lhasa, the capital of the Tibet.

“We walked all the way from Shöl to here and we were told we are not allowed to circumambulate. But look, there are  Chinese people everywhere,” the Tibetan woman says as she shows the ground before the Potala Palace in Lhasa, filled with Chinese and adds that “It’s exactly the same as being in China.”

Turning the camera towards the majestic Potala, the Tibetan spiritual leader His Holiness the Dalai Lama’s traditional winter palace on which a huge red banner has been projected with a message in Chinese that read “Happy celebration of the 100th anniversary of the founding of the Chinese Communist Party, ′′ She than says with great sadness, “Look at what they’ve done on His Holiness’ Palace…the nerve, how did they even think of this?”

While Beijing has already started the centennial celebrations with great pomp, it has also increased the restrictions and crackdown in Tibet, East Turkistan, Mongolia all under its occupation while democratic activists in China and Hong Kong were also under China’s watchful eyes.

Meanwhile, Tibetan NGOs, activists, and supporters of the Tibetan issue across the free world have begun protesting ahead of the 1 July centenary celebrations with more protests and rallies on the day to mark 100 years of repression by the regime.